The first Legion Post in Princess Anne County was started in 1919 with Roy Smith serving as Commander. He and Elmer Brock attended the first convention at Roanoke in November 1919.

This was known as Post 51 and had eight to ten members. George Lawrence was the second Commander. Meetings were held in P.D. Scoff's store in Oceana or the old Kempsville, Oceana and Creeds School. Members arrived either on horseback or in a buggy. Charter members were: R.W. Bonney, Langley Land, Rodney Smith, Edwin Lindsley, Herman Simmons, Bill Rudolph and Clarence Hayman.

In 1929, after a few years of inactivity the Post was reformed and became known as Post 113 with Walter J. Holland serving as Commander. Post 113 held its first meetings in the Old City Hall at 14th and Pacific Avenue for about three months and then moved to the Raleigh Bar (now Holiday Inn) at 14th and Oceanfront where they held their meetings for the next two years. Members at that time were: Albert Sale, Andy Garrison, Henry Winston, Russell Craft, Billy Tarach, Guy Salmons, Roy Smith, Linus Williams, Clarence Hayman, and Lawrence Lockwood.

In 1932 the Post held its meetings in the Dunes Club at 48th Street (then Colonial Club).  During this time division developed between those members that wanted a bar and those that didn't.

Beginning in 1936 Post 113 held their meetings in a thirty by forty foot cabin constructed by Ernest Miner, Sr. at the corner of 17th Street and Mediterranean Avenue. The land was leased from Murphy for $1.00 a year and this served as the Post Home for the next five years.

In 1941 we moved two blocks to 19th and Mediterranean and held our meetings in the Knights of Pythias Hall. The Knights of Pythias lost the property on foreclosure to the Bank of Commerce, they in turn sold to Post 113. At this time the financial condition of the Post was such that a raffle was held whenever the interest payment came due so we could raise $20 to $30 to pay the bank.

During this period the State Convention was held here.

In 1948 after seven lean years the members hoped the next seven would be a little more prosperous so they purchased the property located on Laskin Road for $3000. The north section of the club was built at that time. Construction of the main hall was started in 1949. At this particular time the dinners served on meeting nights were always the same – that great American delicacy – hot dogs!

Many members at that time would remember 1948 as the year Bill Kellam failed to be elected Commander by one vote – losing to Johnny Flanagan. Bill made up for this loss by being elected Commander for two consecutive years and State Commander in 1952. 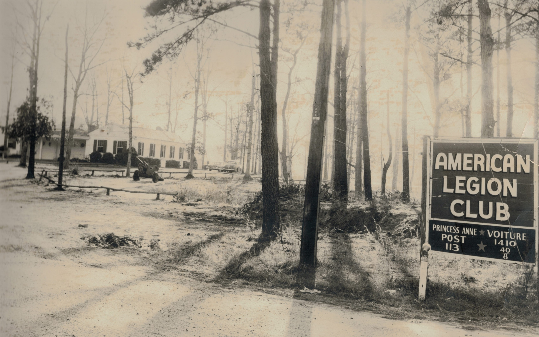 Preamble to our Constitution